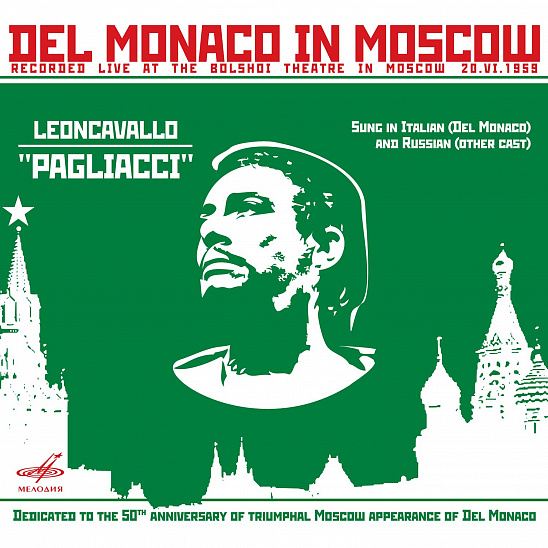 Apple Music / Yandex Music
In June of 1959 Moscow gave a hearty welcome to Mario Del Monaco, one of the best tenors of the world, the soloist of Milanese “La Scala”. Being on tour in the Soviet Union for the first time the singer met many admirers of his wonderful talent. Soviet listeners knew the famous singer well owing to his acting in the films “Enrico Caruso: leggenda di una voce (Young Caruso)” and “Giuseppe Verdi” as well as to his numerous recordings. From the Interview with Mario Del Monaco (Magazine “Soviet Music”, 1959, №8) “The reception in Moscow was beyond any of my expectations. Probably, nowhere I have been welcomed with such hearty warmth. I have performed in “Pagliacci” more than 100 times nevertheless I am nervous before my entrance on the stage. Canio’s part is difficult both vocally and dramatically. The singer cannot make a pause, rest in this opera, there are no “passing” recitatives or intermediate scenes; one must sing continuously, sing expressively, in full voice. It is difficult to conduct the opera “Pagliacci” as there are few completed melodious episodes, and the action develops swiftly. I saw a serious “rival” in Maestro Nebolsin for Melik-Pashaev who magnificently conducted “Carmen”. I must say that the Bolshoi Theatre orchestra under conduction of these two great masters rang splendidly. The cast of the soloists (L. Maslennikova, A. Ivanov, N. Timchenko, E. Belov) who possess very good vocal makings, to my mind, took part in this performance. I am leaving Moscow under the impression of warm and hearty reception that the Muscovites gave to me …” The contest for composing of the best one act opera that had been announced by the Milanese publisher E. Sonzogno caused writing “Pagliacci (Clowns)”. However, Ruggero Leoncavallo made a two act opera and was not allowed to take part in the contest. The text of the libretto was written by Leoncavallo himself and, according to the author’s words, was based on real events. In the original Leoncavallo named his opera “Il Pagliaccio”. At the premiere the part of Tonio had to be performed by the famous French baritone Victor Maurel. The capricious singer stated that his repertoire included only those operas that contained the mentioning of his part. As it concerned Leoncavallo’s opera, the name of the drama referred only to the part of tenor – Clown. “If the title of the opera is not changed, I refuse to sing”, declared the singer. In order not to endanger the premiere the publisher found a brilliant decision to write the title of the opera in the plural – “Pagliacci (Clowns)”, thus he included the part of baritone into the name of the opera. The first night took place in Milan Opera House in May 21, 1892 and was an incredible success. Soon the opera spread over the stages of the world and has been included in the repertoire since then. Sung in Italian (Del Monaco) and Russian (other cast). Live recording from the Bolshoi Theatre on June 20, 1959 Characters and performers: Canio – Mario Del Monaco, tenor Nedda – Leocadia Maslennikova, soprano Tonio – Alexey Ivanov, bariton Beppo – Nikolay Timchenko, tenor Silvio – Evgeny Belov, bariton
Tags: Bolshoi Theatre Orchestra