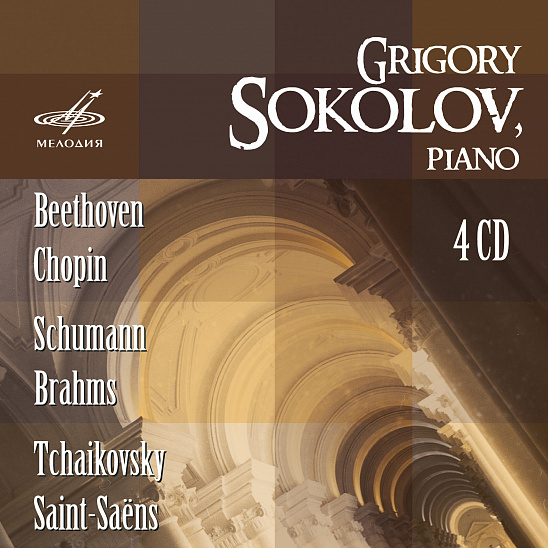 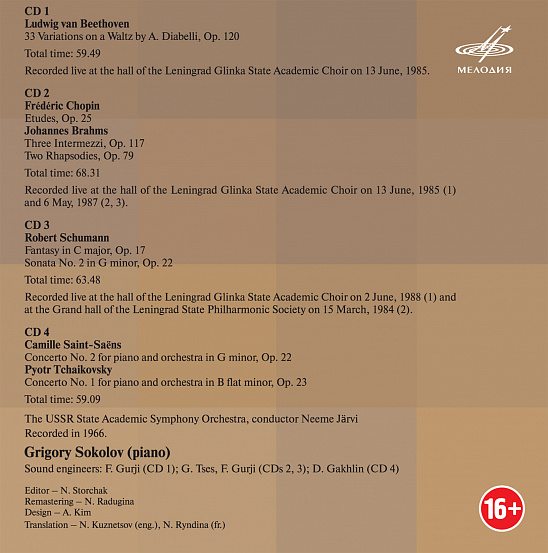 
Yandex Music / Apple Music / Spotify
"Grigory Sokolov's play is notable for special concentration and immersion in the element of music. Like a demiurge, he creates it."
Classica FM

Firma Melodiya presents a set of recordings by pianist Grigory Sokolov. One of the best contemporary representatives of the St. Petersburg piano school, Sokolov is now well known in Russia and beyond. He tours around the globe delighting the audiences of the old and new worlds.

Sokolov is a master of now rare "intellectual" pianism. However, unlike the great piano intellectual of the 20th century Glenn Gould, Sokolov prefers live concerts to studio work. "The biggest chasm is the one between a microphone and an individual," the musician believes.

Most of Grigory Sokolov's recordings have been made in concert, including those featured in this set. It reflects not only his repertoire predilection but also the pianist's rise to the musical Olympus. He performed Tchaikovsky's and Saint-Saëns's piano concertos at the 3rd Tchaikovsky Competition where then a sixteen-year-old pianist became a sensational winner. Later he was attracted to music for piano solo – Schubert, Chopin and Schumann. Afterwards Sokolov was known as a profound and thoughtful interpreter of music by Bach's, late Beethoven's and Brahms's.

"There is always a thought in his interpretations, a multifaceted and concentrated one, leaving its mark on everything… His feelings as an interpreter are deep, but he is able to hold them back, regulate and place them under stage control," wrote Gennady Tsypin, a well-known piano critic.