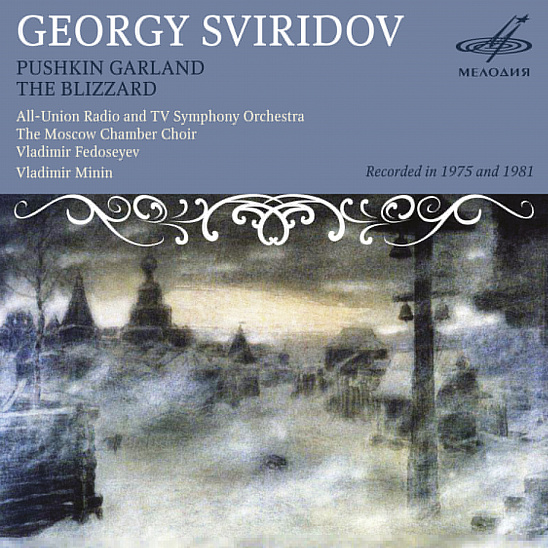 Yandex Music / Apple Music / Spotify / ...
For the 15th anniversary of the death of the outstanding Russian composer Georgy Sviridov, Firma Melodiya presents an album of his best know works of different years. The ideal Georgy Sviridov strived for was music for the chosen ones which belonged to the masses. His creative work was uncommon for 20th century music – he found his style yet remained inside the classical tradition without breaking it. No matter what he composed for – voice, choir or orchestra – his music went straight to the heart evoking a sensitive listener's keen response be it a sophisticated music lover or a dilettante. Sviridov's music revives and continues the best sides of the Russian music tradition. It is no mere chance that his best known compositions are linked with the name of Alexander Pushkin. They are the ones featured on this album. The score to the motion pictures The Blizzard after Pushkin's novel was composed in 1964. It has outlived the film becoming a self-sufficient and incredibly popular symphonic piece from Music Illustrations to Pushkin's Novel. Pushkin's Garland for soloists, choir and instrumental ensemble became the composer's offering for the poet's 180th anniversary. This choir cycle opened a new page of Sviridov's creative path anticipating his late vocal opuses. Sviridov's works are performed by the All-Union Radio Big Symphony Orchestra conducted by Vladimir Fedoseyev, a recognized interpreter of the composer's music, and the remarkable Moscow Chamber Choir led by Vladimir Minin.
Tags: Alexander Pushkin, Grand Symphony Orchestra of All-Union National Radio Service and Central Television Networks, Georgy Sviridov, Vladimir Fedoseyev, Moscow Chamber Chorus