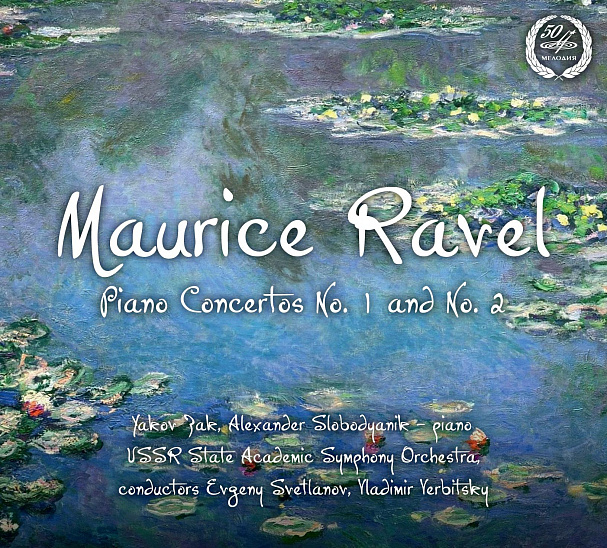 Firma Melodiya presents an album of piano concertos by Maurice Ravel performed by leading Soviet pianists. Both of Ravel's concertos are among the composer's last works and were finished in the early 1930's. The first and most popular concerto is imbued with light and sunny images, and at the same time full of intonations and dance rhythms of the 20th century (jazz, foxtrot, Boston waltz). Ravel's first concerto is performed by Yakov Zak, one of the brightest representatives of the domestic pianistic school of the middle of the 20th century, a winner of the Third International Chopin Piano Competition in Warsaw, a pupil of Heinrich Neuhaus and a professor who educated quite a number of now famous pianists. The second concerto composed for the left hand has stern and tragic colouring. The part for one hand is rich in virtuosic devices and extremely difficult. The concerto was recorded by Alexander Slobodyanik, another representative of the Neuhausschool. "Emotional wealth", "completeness of sensations", "spontaneity of artistic experience" are only some of the epithets that accompanied the concerts and recordings of the pianist who actively performed in this country and abroad for over forty years. The album also features two symphonic works by Ravel – an early piece Pavane pour uneinfantedéfunte (Pavanefor a Dead Princess) and choreographic poem La Valse performed by the USSR State Academic Symphony Orchestra conducted by EvgenySvetlanov.
Tags: Maurice Ravel, USSR State Symphony Orchestra, Evgeny Svetlanov, Yakov Zak