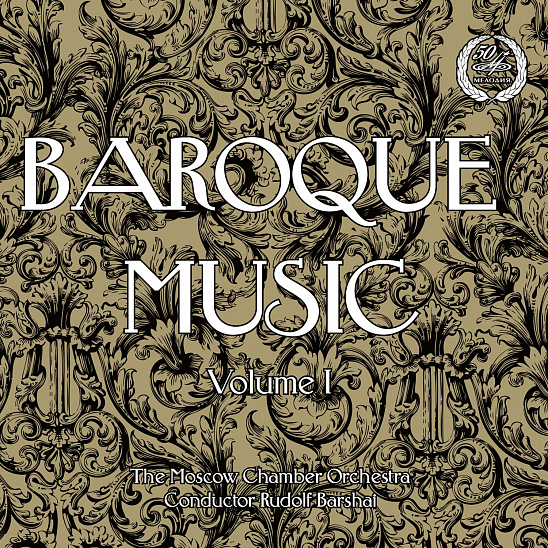 Firma Melodiya presents recordings of baroque music performed by the Moscow Chamber Orchestra lead by Rudolf Barshai. The name of this musician emerged in the Soviet concert life in the early 1990's. He quickly became successful as a solo violist and ensemble player. However, his thirst for something new and his strive for breaking stereotypes, which were the way of many cultural figures of the Thaw period led him to creating the first ever Soviet chamber orchestra. An exceptionally talented conductor and organizer, Rudolf Barshai won many well-known musicians over to joint playing, including those who had promising solo careers (violinist and conductor Lev Markiz, cellist Alla Vassilieva, harpsichordist and pianist Mikhail Muntian, oboist Evgeny Nepalo, bassoonist Vladimir Bogorad and others). The performances of the new orchestra surprised and admired the listeners. Its repertoire included compositions, which were previously little known to the domestic listeners, and on the contrary some well know, even "outworn" music, which sounded in a totally new way. The compositions featured on this album are instrumental concertos by Tomaso Albinoni and Antonio Vivaldi, the concerto grosso by George Friedrich Handel and a suite by "Bach's fortunate rival" Georg Philipp Telemann became a discovery to the Soviet audience of the years. Even today, when we have so many alternative versions to choose from and when "authenticity" is in fashion, these recordings from fifty years ago have not lost their originality. We still feel that peculiar freshness, audacity of the pioneers who discovered a new and at the same time so contemporary world of baroque music for themselves and their listeners.
Tags: Antonio Vivaldi, Rudolf Barshai, George Frideric Handel, Moscow Chamber Orchestra, Georg Philipp Telemann