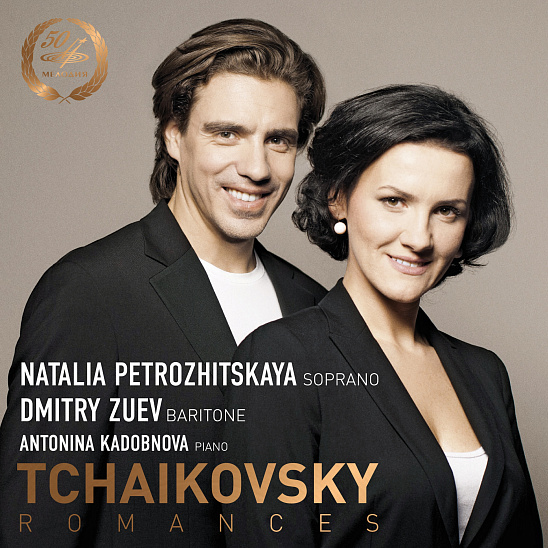 The Tchaikovsky Romances album is one of the leading projects released on Melodiya in the framework of its anniversary year and on the threshold of Pyotr Tchaikovsky's 175th anniversary.
Seventeen selected romances of the composer are represented by musicians from the new generation of Russian performing school. The graduates of the Moscow Conservatory Natalia Petrozhitskaya and Dmitry Zuev are prize winners of international competitions and leading soloists of The Stanislavsky and Nemirovich-Danchenko Music Theatre who have actively toured across Russia and abroad. Antonina Kadobnova is a participant of international competitions and festivals, and a repeat winner of the Best Concertmaster Diploma who has collaborated with world-known singers and performed as a solo artist.
The artistic duo of Natalia Petrozhitskaya and Dmitry Zuev is well known to and highly appreciated by the audience. The singers perform together works from both world and Russian classical opera. However, Tchaikovsky's music takes a special place in their repertoire. It is not without reason that competent music critics reckon their parts in Eugene Onegin among the highest achievements of the soloists.
The works collected on the album are contemporary and living rendition of Tchaikovsky's vocal classics ranging from lyrical pieces of the composer's early period (“My Genius, My Angel, My Friend,” “Do not Believe My Friend” and “Why?”) to passionate dramatic and love monologues (“To Forget So Soon,” “If Only I Had Known,” “Don Juan's Serenade”), philosophic reflection of the latter years (“Softly the Spirit Flew Up to Heaven,” “Exploit”) and, finally, a premonition of death reproduced in the composer's last romance (“Again, As Before, Alone”). “Cradle Song” and “The Love a Dead Man” so intimately and deeply interpreted by the singers deserve a special mention, as well as the duet “Tears,” a meaningful and dramatic centerpiece of the album consolidating the collection of romances sung by Natalia Petrozhitskaya and Dmitry Zuev.