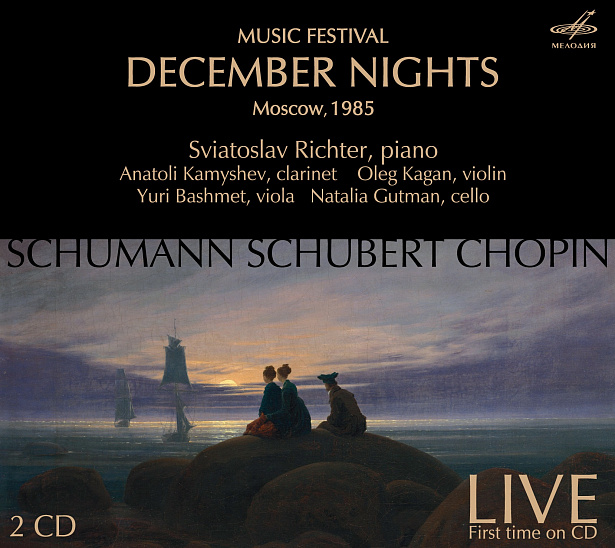 Firma Melodiya continues the series of compact discs dedicated to December Evenings Festival that takes place at the Pushkin State Museum of Fine Arts. This album, like the previous one, is dedicated to the 1985 festival World of Romanticism and includes recordings featuring Sviatoslav Richter.

The atmosphere of December Evenings, an event initiated by the great pianist, differed from usual philharmonic concerts. The spirit of music as an inseparable part of "fusion of arts" the romanticists dreamt of was invisibly felt in each number; a sensitive listener can catch it in these, perhaps technically imperfect, concert recordings from thirty years ago.

The works by Schubert, Schumann and Chopin were performed by Sviatoslav Richter in ensemble with his outstanding contemporaries, violinist and David Oistrakh's student Oleg Kogan who passed away prematurely, violist Yuri Bashmet, cellist Natalia Gutman and clarinettist Anatoly Kamyshov. Along with popular compositions (Chopin's Polonaise-fantaisie, ballade and cello suite, and Schubert's sonata for violin and piano), the programme featured works which were less known to the audience – Schumann's Piano Trio, his late opuses Fairy Tale Pictures, Op. 113 for viola and piano, and Fantasy Pieces, Op. 73, in their original version for clarinet and piano.