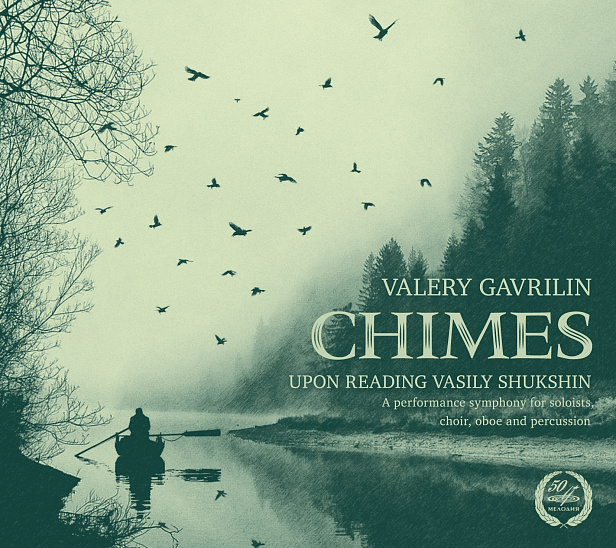 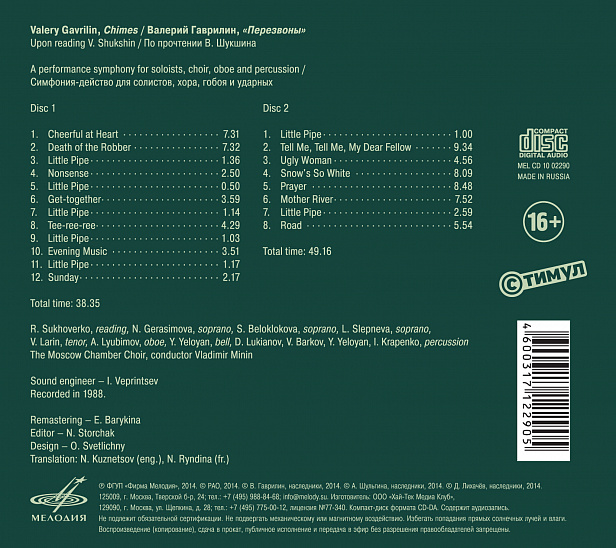 Firma Melodiya presents one of the brightest masterpieces of Russian choral music of the 20th century – Valery Gavrilin’s Chimes. This composer is by right named Georgy Sviridov’s successor. The major motifs of Valery Gavrilin’s music are associated with folklore, images of the Russian north and native region of Vologda. Chimes, a “performance symphony” as the composer defined the genre of the piece, was written for soloists, choir, oboe and percussion, and subtitled “upon reading V. Shukshin”. The roots of his art go deep into the native land”, Gavrilin commented on the works of Vasily Shukshin, an outstanding Russian writer, actor and film director, a singer of the Russian provinces. The key image of the piece was borrowed from one of Shukshin’s novels – a “noble robber” (Stepan Razin, a Cossack leader of the Russian peasant revolt of the 17th century). The text was compiled of folklore sources and Vladimir Monomakh’s Instructions, a Russian literary monument of the 12th century. Chimes was premiered in Leningrad and Moscow in 1984. The work which received a State Prize of the USSR won recognition of a broad audience. “It is written with blood of the heart. Living, contemporary music of a deeply national stamp, and above all, of a present-day world-view born here, in our land”, Georgy Sviridov commented on the work. Chimes was composed for the Moscow Chamber Choir which was founded by the prominent choral conductor Vladimir Minin in 1972 and is still one of the best choirs of Russia has successfully represented traditions of Russian choral signing in this country and abroad. The recording of Valery Gavrilin’s Chimes performed by the Moscow Chamber Choir with the participation of Rogvold Sukhoverko, a renowned actor of Sovremennik Theatre, Anatoly Lyubimov, an oboist and soloist of the State Academic Symphony Orchestra, and other musicians led by Vladimir Minin was made in 1988.
Tags: Valery Gavrilin, Moscow Chamber Chorus