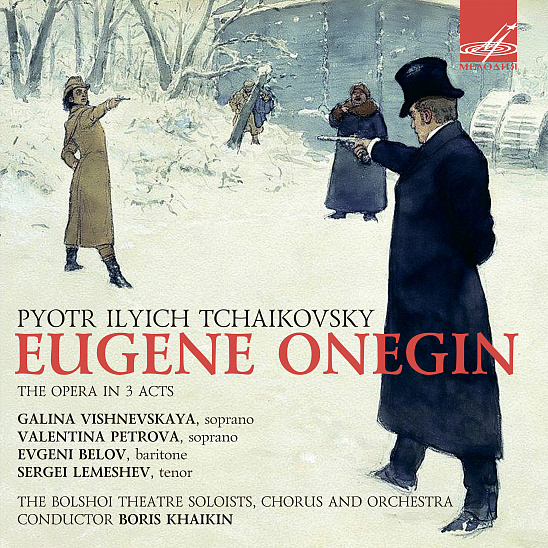 Yandex Music / Apple Music / Spotify / ...
Firma Melodiya presents one of the most famous and loved work of the greatest Russian composer Pyotr Ilyich Tchaikovsky – the opera Eugene Onegin. This 1955 staging featured some of the leading artists of the operatic stage – Galina Vishnevskaya as Tatyana, Sergey Lemeshev as Lensky, Yevgeny Belov as Onegin, Ivan Petrov as Prince Gremlin, and also the soloists, choir and orchestra of the USSR Bolshoi Theatre conducted by Boris Khaikin. The composer turned to the story of Alexander Pushkin’s novel in verse of the same name in 1877, and it took him less than a year to compose the opera. Tchaikovsky somehow reconsidered the plot of the novel focusing on its lyrical component, its heroine Tatyana, and her love for Onegin. Tatyana confesses her feelings to Onegin, but he discards her. After awhile, he sees her in a ballroom and realizes he is in love with her, but it is too late – she is already another man’ wife and won’t be unfaithful to her spouse. Tatyana performed by Galina Vishnevskaya is a fine example of acting and richness of vocal palette. Also, the critics have repeatedly noted the genial performance of Sergey Lemeshev as Lensky. His deeply heartfelt performance makes the character of a lyrical poet so real, touching and at times tragic.
Tags: Pyotr Ilyich Tchaikovsky, Bolshoi Theatre Orchestra, Galina Vishnevskaya, Sergei Lemeshev, Boris Khaykin, Choir of the Bolshoi Theater