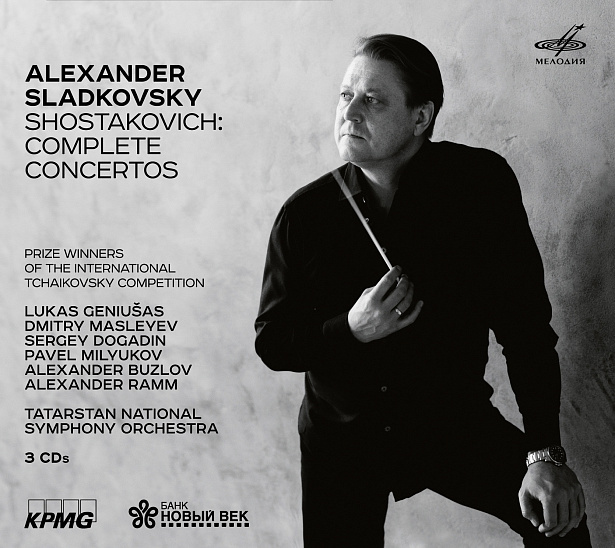 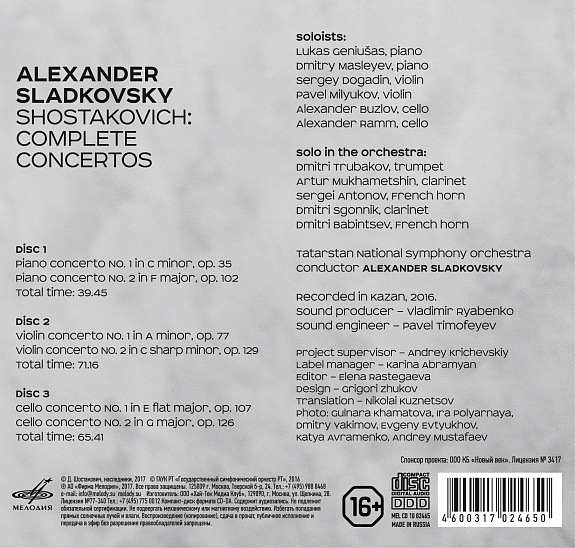 Melodiya presents Dmitri Shostakovich’s instrumental concertos performed by young soloists, prize-winners of the XIV and XV International Tchaikovsky Competitions, and the State Symphony Orchestra of the Republic of Tatarstan conducted by Alexander Sladkovsky.

The Instrumental concertos occupy a special niche in Shostakovich’s legacy. In terms of depth of the content and scale of the concept they are not inferior to his symphonic cycles. At the same time, the personal acute statements bring them closer to the master’s chamber music that was somewhat of the composer’s diary, “internal voice” throughout his artistic life. Shostakovich wrote his concertos, and chamber music as well, with personalities and performing styles of certain musicians in mind. So, he wrote the piano concertos for himself (No. 1) and his son Maxim (No. 2), both violin concertos for David Oistrakh, and the cello concertos were inspired by the art of Mstislav Rostropovich. However, today Shostakovich’s instrumental concertos enjoy wide deserved popularity and are present in many musicians’ repertoire.

This set is the first part of a big project that includes recordings of Shostakovich’s symphonic music made by Alexander Sladkovsky and the State Symphony Orchestra of the Republic of Tatarstan earlier in 2016, the year of the composer’s 110th birthday. The People’s Artist of Russia who has performed with some of the best symphony orchestra of Moscow and St. Petersburg, Alexander Sladkovsky became the orchestra’s chief conductor in 2010. With him at the helm, the orchestra is now one of the best symphony collectives of this country. It has been a participant of international music festivals and collaborated with the best domestic and foreign soloists.

The careers of Lukas Geniušas, Alexander Buzlov, Alexander Ramm, Dmitri Masleyev, Sergei Dogadin and Pavel Milyukov began in the 21st century, but we are confident when we say that they are among the most remarkable representatives of music art of their generation and worthy successors of the great traditions of the Russian performing school.