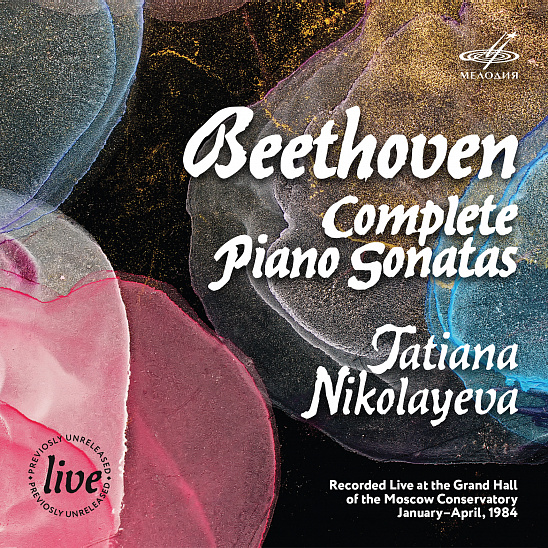 In the year of Beethoven’s anniversary, Firma Melodiya releases these live recordings of the outstanding Soviet pianist for the first time. Tatiana Nikolayeva performed and recorded a complete cycle of Beethoven's sonatas at the Grand Hall of the Moscow Conservatory in 1984, but it was not released on records back in the day.

“This is clever mastery ... purposeful and deeply meaningful,” they wrote about Tatiana Nikolayeva’s performing art in the early years of her pianistic career. During half a century, the pianist gave about three thousand recitals and performed more than a thousand works by various composers. But like any talented musician, Nikolayeva had her own peaks.

The first one was Bach. At her diploma exam, the graduate of Alexander Goldenweiser was prepared to perform any of the 48 preludes and fugues of the Well-Tempered Clavier! This was followed by a triumphant victory at the Bach Competition in Leipzig in 1950, where she performed cycles of Bach’s concertos, suites and other clavier pieces.

The second peak was Dmitri Shostakovich’s 24 Preludes and Fugues. The composer, who was one of the judges at the Bach Competition, was delighted with the young pianist’s skills and entrusted the premiere of his polyphonic cycle to her. Nikolayeva recorded it thrice later on.

Beethoven was the third and perhaps the highest peak of Tatyana Nikolayeva’s performing career. She performed a complete cycle of his piano sonatas for the first time during the concert season of 1963/1964 (previously, only Maria Grinberg had the courage to do it in this country). By the time, her pianistic manner had come to true artistic maturity. “She is a strong, impressive performing individuality. Her playing combines a high culture and precise craftsmanship with freedom and artistry of expression,” the famous piano critic Grigory Kogan enthused over Nikolayeva in 1964.

“My liking for cycles is by no means gigantomania, but an opportunity to fathom a composer’s world, to embrace it entirely, to feel and understand it more deeply,” the pianist wrote. Two decades later, Nikolayeva would play all Beethoven sonatas again. She gave a series of eight recitals from January to April 1984. It became one of the greatest achievements not only in the pianist’s artistic career, but also in the entire Soviet musical and performing arts of the 1980s. And it certainly deserves to be brought back to the cultural audio environment of our time.