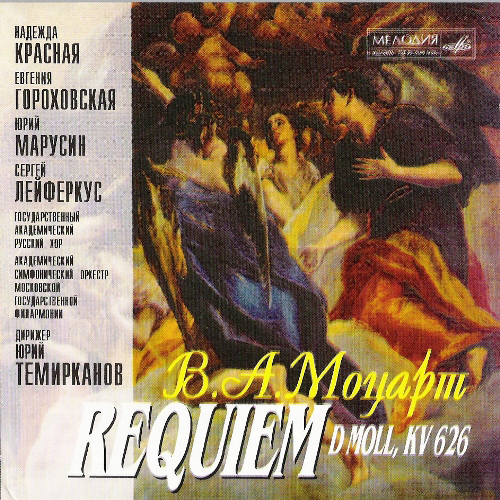 “Requiem” is one of the last but the greatest creations of Wolfgang Amadeus Mozart. The Latin canonical text of the Mass was formed in the Middle Ages. Its common name is derived from the first word of the text “Requiem” that means “peace, quietness.” Mozart’s own words found its reflection in this music, “There was no single day when I was not thinking about death.” The images of music in “Requiem” provide proof of his deeply private tragic emotional experience - actual for everyone eternal problem of death and life. Mozart’s “Requiem” is performed by the most outstanding musicians from Saint Petersburg (then Leningrad) and Moscow in the Great Hall of Moscow Conservatory (documentary phonogram). The present record of “Requiem” performed by the leading Russian musicians is the evidence of the definite tradition of its interpretation that has developed in Russia. It comes to the search of some proportion between the unavoidable “concert likeness” and strictness of expressiveness that do not let emotions transform into theatrical sentimentality. The pursuit of perfect forms of interpretation is characteristic of Yuri Temirkanov and the ensemble under his conducting that this record of Mozart’s ingenious creation reflects in full measure.
Tags: Wolfgang Amadeus Mozart, Moscow Philharmonic Orchestra, Yuri Temirkanov