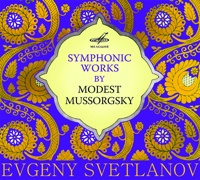 "Life wherever it shows; the truth no matter how rough it is, a bold, sincere speech to the people… - that is my background, that is what I want and that is where I'd be afraid to miss the mark...," Mussorgsky said defining his creative credo. Today, the composer who was passed over for fame when he was alive, who perplexed even the distinguished peers and comrades is one the recognized geniuses of the 19th century who like Dostoevsky reflected all contradictions and secrets of the Russian soul. It is widely accepted that Mussorgsky' highest achievements are related to opera and vocal music. However, his numerous orchestra compositions hide a lot of original things, be it his early Intermezzo, or the triumphal march The Capture of Kars composed on order, or a fabulous St. John's Night on the Bare Mountain coming from Berlioz and Liszt but so original in its material and form. Mussorgsky's symphonic works featured on this disc are the wonderful complement to Pictures from an Exhibition in a popular orchestration of Maurice Ravel. The symphonic interpretation o this piano cycle proves an orchestra scale of the composer's thinking (it was not without reason that many authors of the 20th century arranged piano parts of his songs for orchestra). Mussorgsky's compositions are performed by the USSR State Orchestra conducted by Evgeny Svetlanov, a recognized master of interpretation of the Russian symphonic music.
Tags: Modest Mussorgsky, Evgeny Svetlanov