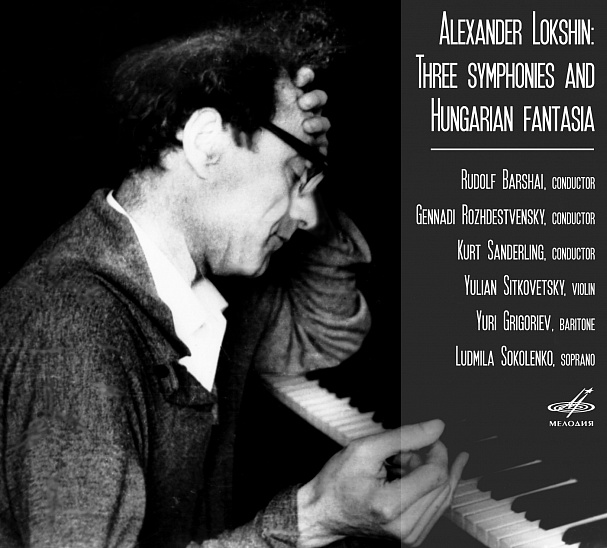 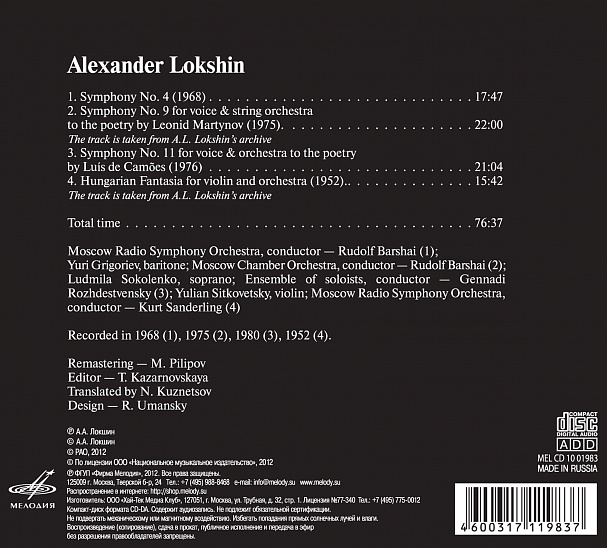 Melodiya revives the works of Alexander Lazarevich Lokshin, a composer who had a talent of a vast range and truly tragic keenness similar to that of Mahler. Because Lokshin spent many years under a burden of unfair accusation of snitching, loneliness and alienation of even his kindred spirits, his life reflected many of the fates of the Soviet intelligentsia who were driven into the corner of inner emigration, but did not spiritually give up. Lokshin was considered a genius by some of the major representatives of the domestic culture of the 20th century – Marina Yudina and Dmitry Shostakovich. The compositions featured here uncover various sides of his composing talent. Whereas his earlier Hungarian Fantasia is viewed as a tribute to virtuoso concerto genre (as performed by the outstanding, untimely gone violinist Yulian Sitkovetsky), Symphony No. 4 appears attractive due to its concentration, tangibility of music images, dynamics combined with a clear logic of symphonic development. Symphony No. 9 for baritone and chamber orchestra to the poetry of Leonid Martynov can be called one of the composer’s most anti-Stalinist works. Its only performance during Lokshin’s life caused a scandal, and the recording of the premiere was destroyed. Finally, Lokshin’s last symphonic opus, Symphony No. 11, was related with the poetry of the great Portuguese author of the Renaissance Luís de Camões. Lokshin’s compositions are performed by one of the best interpreters of Russian music of the 20th century Gennady Rozhdestvensky and an outstanding musician and a pioneer of chamber orchestra style in the USSR Rudolf Barshai.
Tags: Rudolf Barshai, Gennady Rozhdestvensky, Moscow Chamber Orchestra, Kurt Sanderling, Julian Sitkovetsky