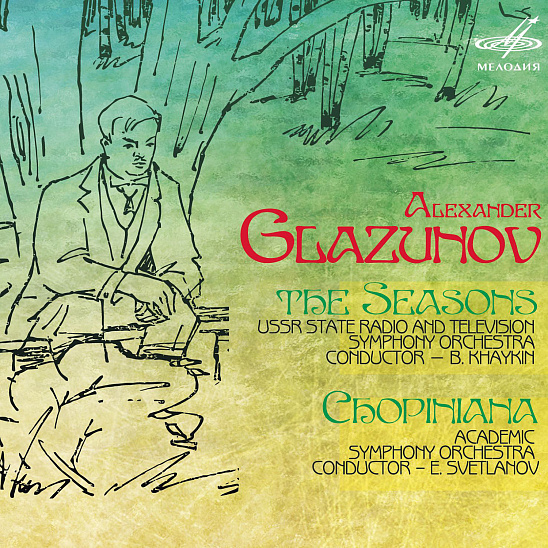 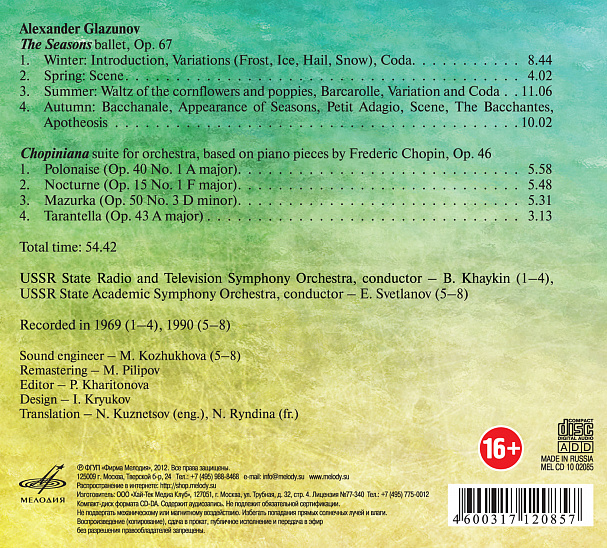 Firma Melodiya presents some of now rarely performed ballet gems by Alexander Glazunov. At the age of sixteen, Glazunov appeared before the public with his first symphony showcasing early and surprisingly harmonious development of his outstanding talent. A pupil of Balakirev and Rimsky-Korsakov and a musical heir to The Five, he was also a careful student of Tchaikovsky's works (the composer also positively appreciated his young colleague's aptitude). Glazunov's style imbibed the best traditions of Russian music such as epic power, vivid emotional expressiveness, colourful orchestration and depth of symphonic development. Glazunov's ballet music continued the tradition of Tchaikovsky's "symphonic ballets". The Seasons was ordered by Ivan Vsevolozhsky, the director of the Imperial Theatres, and completed in 1900 to be choreographed by Marius Petipa at the St. Petersburg's Hermitage Theatre. Conceived as an allegory of Nature with its eternal cycle of youth, growing and ageing, the ballet did not see a proper stage production when the composer was around, but its music enjoyed popularity very soon (Glazunov had a reason for calling it one of his favourite creations). The suite Chopiniana, an orchestration of diverse pieces by Chopin, was composed in 1892. Sharing the love of many Russian composers for Chopin's music, Glazunov displayed a magnificent sense of style and orchestral skills. The piano pieces did not become any heavier but got a new sound in a new facet. The Ballet master Michel Fokine made use of the suite fifteen years later when he created his famous ballet performance. Glazunov's works were recorded by the celebrated Soviet symphony orchestras led by the prominent conductors of the 20th century Boris Khaikin and EvgenySvetlanov.
Tags: Alexander Glazunov, Grand Symphony Orchestra of All-Union National Radio Service and Central Television Networks, USSR State Symphony Orchestra, Evgeny Svetlanov, Boris Khaykin