Tchaikovsky: The Seasons & Serenade for Strings 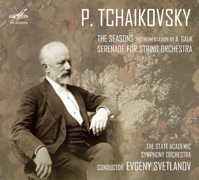 Tchaikovsky: The Seasons & Serenade for Strings

Firma Melodiya presents a release of Tchaikovsky's chamber music. The Seasons and Serenade for Strings were composed in the second half of the 1870s – early 1880s, in a period of the composer's first creative uplift. Those were the years when the author of Symphony No. 4, Eugene Onegin and Swan Lake stepped into an age of genuine artistic maturity, and not only his large-scale dramatic opuses but also smaller pieces composed for a narrower circle have the seal of that maturity. When the composer was alive, The Seasons and Serenade for Strings became world-known. Twelve characteristic pieces for piano emerged as a musical attachment to a monthly Nuvellist magazine. However, Tchaikovsky created one of the most poetic cycles, and there's hardly another one in the entire piano literature that would equal it. This recording features an orchestra rendition of The Seasons realized by Alexander Gauk, an outstanding Soviet conductor, composer and educator. Serenade for Strings is one of the brightest examples of Tchaikovsky's Mozartiana. This piece is an uncommon combination of marks of "old music" in the first movement (subtitled "a piece in the form of sonatina"), romantic elevation of Valse and Élégie, and festive merriment of the finale based on a folk dance theme. The images of the Serenade are far from dramatic emotions of Tchaikovsky's symphonism. Nevertheless, the author extremely rated his piece and always included it in the programme of his overseas performances. Pyotr Tchaikovsky's compositions are performed by the USSR State Academic Symphony Orchestra conducted by Evgeni Svetlanov, a recognized master of interpretation of Russian symphonic music of the 19th and 20th centuries.
Tags: Pyotr Ilyich Tchaikovsky, USSR State Symphony Orchestra, Evgeny Svetlanov