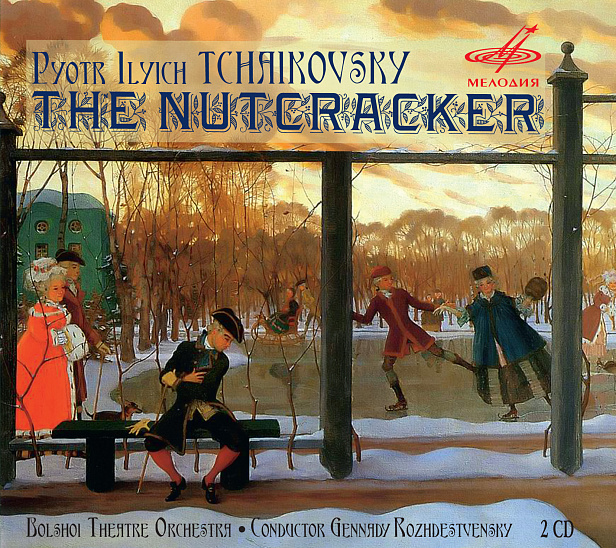 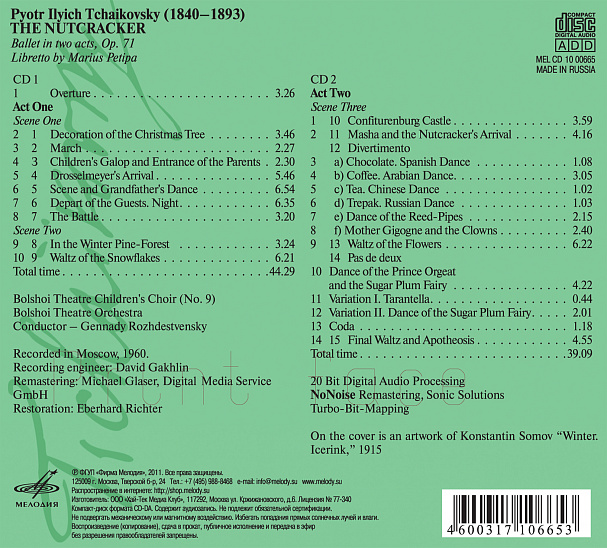 German romantic writer E.T.A. Hoffmann wrote a fairy tale of a noble and handsome bewitched prince Nutcracker and a sweet, good and selfless girl Masha, and their enemy evil King of mice. Later a French writer Alexander Dumas-pére retold it in his own way, with inherent him joie de vivre and brilliance. He freed a plot of a whimsical creation of Hoffmann's fantasy from the great number of unnecessary details, did a central idea of fairy tale more raised, but images of heroes - more simply and more human, more warm and brighter. In this form the fairy tale was used like a base of a staging plan and libretto, formed by ballet master Marius Petipa for Tchaikovsky in February 1891. Firstly "The Nutcracker" was not much liked by the composer, and he took the commission enough unwillingly. Much greater interest caused simultaneously offered to him libretto of opera "Iolanta" (both these works - Two-Acts-ballet and One-Act-opera expected to be performed on the stage of Petersburg Mariinsky theatre in one evening). However gradually Tchaikovsky keened on the new ballet: internal depth and beauty of the fairy tale are suddenly revealed before him, awoke his inspiration. Since a phantasmagoria became for Tchaikovsky only a form of allegory, he felt himself "in his elements": music of a "puppet-ballet" begun to speak of authentic human feelings. A poem of a young, pure maiden's soul, arose with the emotion standing on the threshold of life, and on waiting of happiness, and of the omnipotent dream, ruled over the human heart. "You write a fairy tale, almost not breathing to not to blow away a fine pollen, by which it is covered. And you write quickly, because Hashing of light, shades and separate pictures occurs rapidly and easy. It is impossible to be late, it is impossible to lag behind run of imagination". Unless know that these words belong to our contemporary - a writer Konstantin Paustovsky, it may be thought they are said by Tchaikovsky on "The Nutcracker". These words express an essence of his relations to this choreographic fairy tale, which was written as if in one breath (score of ballet was begun at January and completed on March 23, 1892). "The Nutcracker " strikes by an artistic integrity and endless diversity of colors, inexhaustibility of melodic and orchestral fantasy of composer, who emerged in this work in full possession of mature, genuine masterly skill of musician and playwright. Brilliant and full expression got in "The Nutcracker ", on the one hand, Tchaikovsky's disposition and ability to write dances, shown by him from the first steps of his creative way, on the other hand - symphonism of his thinking ("After all, ballet is also a symphony", - the composer has written to his publisher P. Jurgenssohn). Not rejecting and not destroying forms and genres of ballet music, that were established by then, Tchaikovsky comprehends them in a new fashion, giving them unbeknownst for the ballet theatre power of artistic and emotional generalization, and animating them. Before Tchaikovsky, ballet music consisted of ensembles interleaving with each other separate dances, which could be moving as please. Now ballet found musical and dramatic self-dependence, indivisible line of development. Tchaikovsky saves a difference between dance and pantomime, classical dance and character dance, but in ditto time quite often "alloys" them, forming various by artistic method such expressive scenes, where music sensitively responds to all windings of scenic action, being in ditto time a lyrical generalization of the personages' feelings. In "The Nutcracker" we can see such examples especially in waltzes and wide symphonic adagios, which are sometime the focuses of the high and fiery feelings, sometime the tops of poetical lyricism, and sometime the light apotheosis. Without exaggeration they could be qualified as tiny symphonic poems, graceful and purposeful in its musical dramaturgy. On the figurative contents the fantastic scenes have not less significance, particularly the central one - a scene of battle of mice and the tin toy soldiers, through the "toy" topic of which is seen a dramatic collision: the good struggles against the evil, struggles to the death. Energy of melodic development and using of timbres of separate orchestral instruments as well as instrumental groups are being distributed by the composer with a strict correspondence to the development of the plot and individual personages. Entering each new timbre is a most important color, refreshing perception, giving necessary contrast, and confirming culmination significance of one or another episode. Music of "The Nutcracker" has sounded for the first time as a Suite at the symphonic concert of the Russian Musical Society in Petersburg on March 7th, 1892, and had a great success. As the composer's brother certified, "five parts of the Suite (from the six ones) were repeated on the unanimous requirement of public". First performance of the ballet took its place on the stage of Petersburg Mariinsky theatre on December 6th, 1892. In Moscow "The Nutcracker" was staged for the first time after Great October revolution only. First night of the ballet took place in the Bolshoi theatre on May 21st, 1919.
Tags: Pyotr Ilyich Tchaikovsky, Gennady Rozhdestvensky, Bolshoi Theatre Orchestra