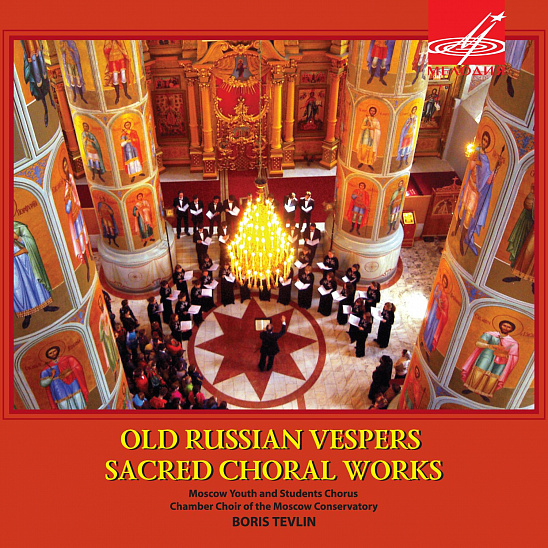 The composition on the disk named “Old Russian Vespers” was created by the outstanding mediaevalist Tatiana Vladishevskaya as some kind of present to celebrate the 1000th anniversary of Baptizing of Russia by Saint Vladimir. The performance of it by one of the leading choirs of the Soviet epoch – Moscow Youth and Students Chorus under direction of Boris Tevlin – served the prime purpose of enlightening, to say nothing of artistic explorations. The objective was to attract the attention of general public to the religious music of Old Russia. Within long decades listeners were separated from the mighty source of the native spiritual culture. Alongside with choir music there represented so called poglasitsy – melody formulas for divine service. The famous opera singers who performed in many theatres of Russia and Europe took part in recording of “Old Russian Vespers” as soloists. The main trends and styles of Russian spiritual music of the last 250 years are presented in the second part of the album. The combination of works that really became the classics of religious art of Russia and little known works of the venerable composers who got to be famous as secular composers generates interest. Boris Tevlin and his famous Chamber Choir of the Moscow Conservatory have this programme recorded.
Tags: Sergei Taneyev, Nikolai Rimsky-Korsakov, Mikhail Glinka, Chamber Choir of the Moscow Conservatory, Mily Balakirev, Nikolai Golovanov