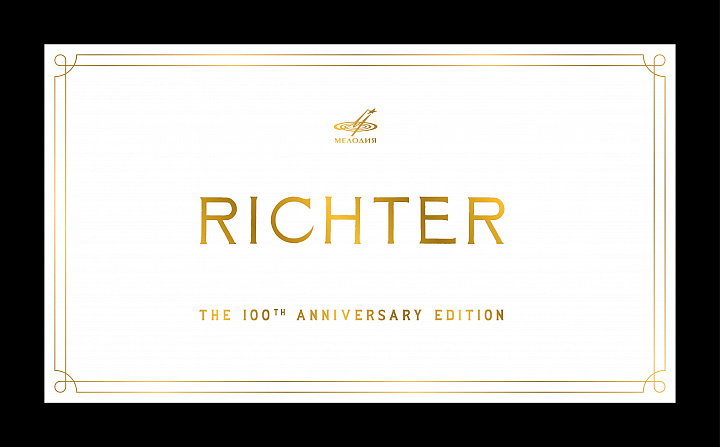 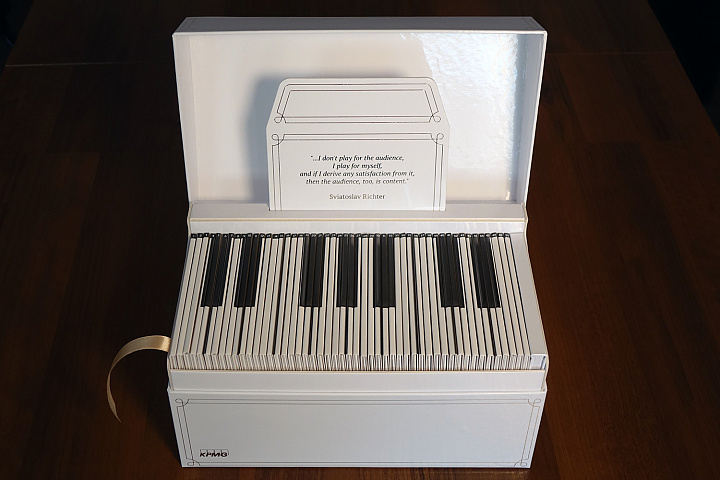 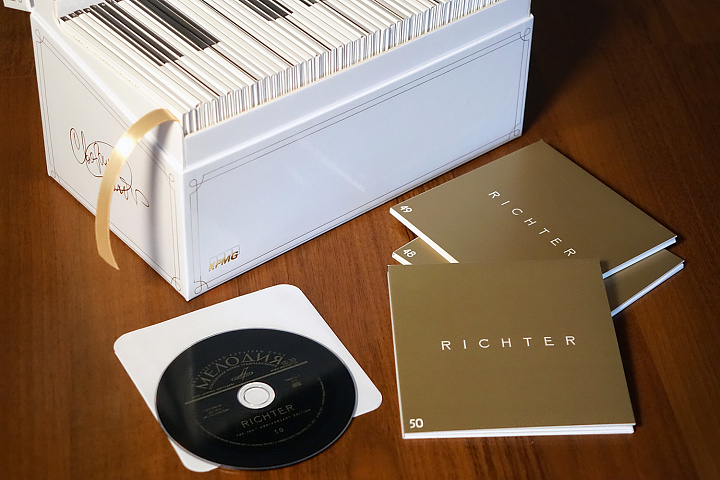 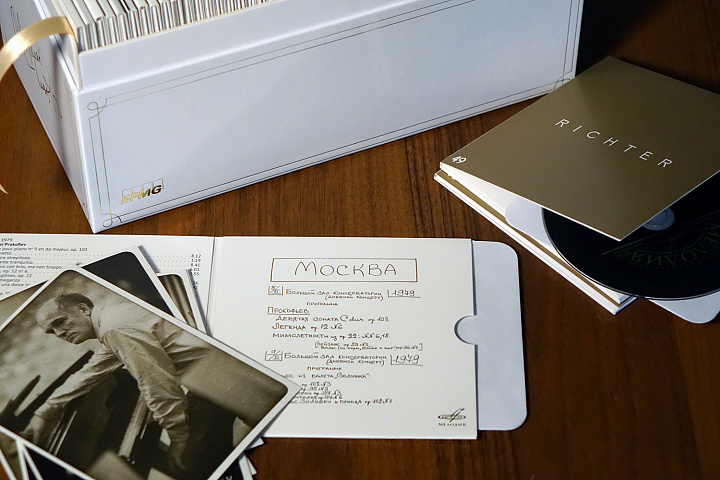 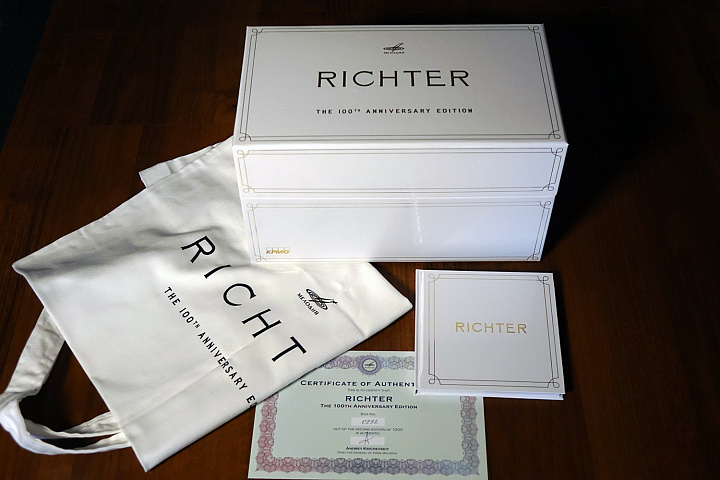 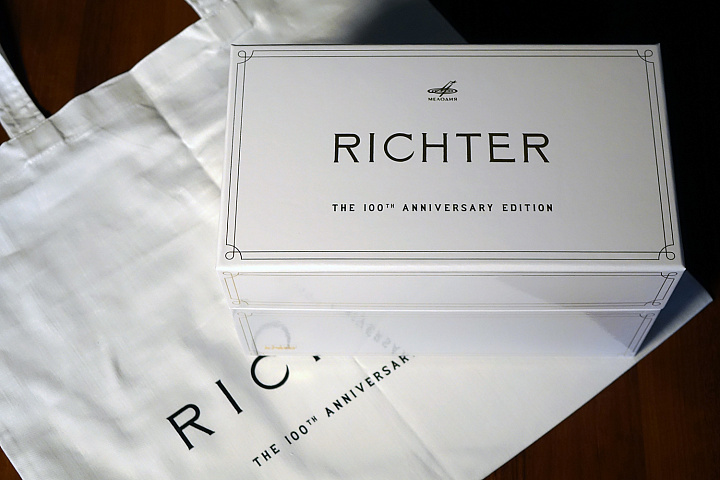 Sviatoslav Richter was not “one of” but the most prominent musician of the 20th century. His life was a charter of immunity for the divine criteria in art.
Yuri Bashmet

For the 100th anniversary of Sviatoslav Richter, Firma Melodiya presents its arguably biggest project in its semicentennial history.
The name of Sviatoslav Richter is inscribed in gold in the history of music. He was not just “more than a pianist,” he was even more than a musician. An owner of composing, conducting, artistic, directing and acting gifts, a connoisseur of literature, arts and philosophy, with a will of iron he made all his gifts serve the art of pianism. An “artist of planetary scale,” as of the critics put it, Richter was like that in everything – in his unbounded repertoire that he never stopped replenishing until his last years, in his priestly frenzy of hours-long rehearsals, in the geography and number of performances, – over 3 500 concerts in 770 places of the world for 55 years of his musical career! (“He was somewhat fathomless, Richter,” said one of his famous colleagues). However, after he conquered the world (almost literally), he remained indifferent to ovation and eulogies of the press, painfully experienced each of the “defects” he noticed in his performance, and at the end of his way confessed before the journalist Bruno Monsaingeon: “I don’t like myself.”
Of course we inherited numerous recordings from Sviatoslav Richter, live and studio ones (although he preferred the former to the latter). Hundreds of records and CDs have been released on domestic and foreign labels (the first of them, gramophone ones, appeared in the 1940’s while some others became available as late as in this century). However, even the existing body of recordings captures neither his complete repertoire nor the entire essence of Richter’s art – the same pieces could sound differently over the years, or even over a day!
And now, Firma Melodiya that recently marked its 50th birthday makes a unique present for both sophisticated experts and a broad circle of music lovers –
a 50-CD set of Sviatoslav Richter’s concert recordings!
It has to be understood that this collection is far from the complete phonographic legacy of the great musician. Nevertheless, the set includes plenty of exclusive, previously unreleased recordings that will make the hearts of even most erudite connoisseurs and collectors rejoice.
Most of the featured recordings are broadcasts from the concerts played in Moscow in 1962 to 1983. However, the exceptions are of special interest. These are:
– one of the first of his extant concert programmes – Schubert’s last sonata and Mussorgsky’s Pictures at an Exhibition (1949);
– recording of the concert with Nina Dorliak in Bucharest, in 1958; and
– recordings of “home” rehearsals with Nina Dorliak.
Alexander Scriabin’s Prometheus, on which he plays a “modest” piano part in an orchestra, is evidence of Richter’s extremely broad musical interests, or the recordings of J.S. Bach’s ensemble concertos together with students of the Moscow Conservatory.
Perhaps the listeners will find a number of “repetitive” tracks surprising. Richter played (and recorded) many works time and again. Some of them allow us to track the evolution of the pianist’s art, testify to his constant creative search and dissatisfaction with himself (the interpretations of Berg’s concertos with different performers, different versions of Schubert’s Sonata No. 6, Beethoven’s Third Concerto and Mussorgsky’s Pictures at an Exhibition at an interval of ten and twenty years, respectively). Some other recordings were played in a shorter stretch of time (Beethoven’s Sonata No. 1, Prokofiev’s Sonata No. 2), or in succession – from the mid 1970’s. Considering the growing interest of the public, Richter frequently, fully or partly, repeated his programmes. So, at an interval of one day he played Mozart’s Concerto No. 18 and Rachmaninoff’s Etudes-tableaux. In those unique phonographic documents, a keen ear will detect barely perceptible “atmospheric” changes that captured an inner aura of a certain concert as each of them was a new test for the pianist in terms uncompromising strictness to himself, a new step on the way to Absolute Music.
It would be difficult to name all the names of the composers featured in this set. A great amount of 20th century music, both domestic and foreign, perhaps deserves special attention: Richter performs Myaskovsky’s piano sonata, Shostakovich’s violin sonata and selected preludes and fugues, as well as works by Hindemith, Bartók, Britten, Berg, Szymanowski, Ravel and Debussy. There are numerous piano pieces by Mozart, Beethoven, Schubert, Schumann, Chopin and Prokofiev, a few works by Haydn, Brahms, Tchaikovsky, Rachmaninoff and Scriabin, the first volume of Bach’s Well-Tempetered Clavier. Among the rarely performed ones, we should note Dvořák’s piano concerto and Franck’s chamber ensembles.
The set includes recordings of many of Richter’s ensemble performances with the likes of David Oistrakh, Mstislav Rostropovich, Yuri Bashmet, Oleg Kagan, Natalia Gutman, the Borodin Quartet, the USSR Bolshoi Theatre String Quartet, the singer Nina Dorliak and others. The piano concertos played by Richter are conducted by some of the best Soviet conductors such as Kirill Kondrashin, Evgeny Svetlanov and Rudolf Barshai.
The set looks like a black box in the form of a piano with a reading stand made from lined cardboard, containing, apart from 50 CDs, a set of 5 exclusive postcards.
The set comes with a hardback booklet in four languages (Russian, English, French, and German), each set is placed in an exclusive bag. The set is released in a limited run of one thousand copies and each box has an individual collection number acknowledged with a Certificate of Authenticity.
CD
Lokshin: Songs of Margaret & Symphonies Nos. 7, 10 (1 CD)
CD
Skazanie o Vyolunde (1 CD)
Digital
Один
CD
Beethoven: Symphony No. 4 - Schumann: Piano Concerto (Live)
Digital
Sound Review 6/6
CD
Редьярд Киплинг: Сказки
Digital
Мусоргский: Без солнца, Песни и пляски смерти
CD
Ralph Vaughan Williams: Symphonies Nos. 1-9 (6 CD)
Digital
Инструментальный коктейль. Выпуск 1
Digital
Сказы Павла Бажова. Выпуск 2