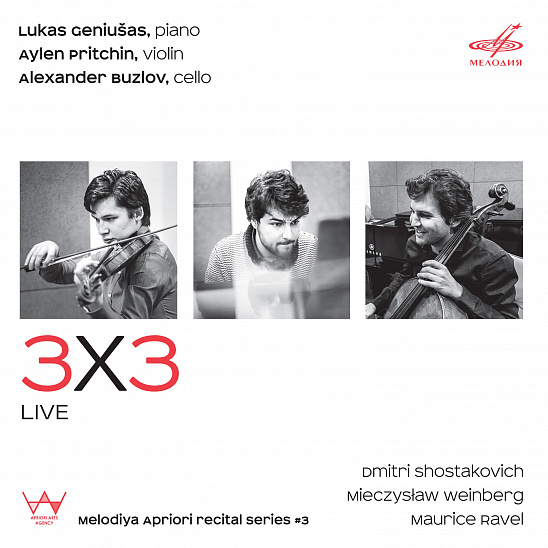 Melodiya presents the album 3×3, another release from the series Melodia Apriori.

Three young musicians play three piano trios written by three 20th century composers. The names of Maurice Ravel, Dmitri Shostakovich and Moisey Weinberg are featured on this extraordinary release. Ravel’s Trio written on the eve of World War I sounds like a peculiar counterpoint to Shostakovich’s early Trio No. 1, a piece written in a pronounced romantic manner when the composer was a student of the St. Petersburg Conservatory while the Shostakovich as we know him is presented here only hintingly. Moisey Weinberg, who has been usually referred to as one from Shostakovich’s circle, fled to the USSR from Poland when it was occupied by Nazi Germany and lost almost his entire family there, wrote his piano trio at the end of the Great Patriotic War. Bearing the stamp of the composer’s bright identity without any taint of imitation of Shostakovich, this music breathes true tragedy of despair.

The performers of the trios written by Ravel, Shostakovich and Weinberg are well known to music lovers. The violinist Aylen Pritchin is a prize-winner of numerous international competitions, including the Grand Prix of the Long-Thibaud-Crespin Competition in Paris and the International Henryk Wieniawski Violin Competition in Poznan, Poland, concertmaster of the chamber orchestra Moscovia and assistant to Professor Eduard Grach at the violin department of the Moscow Conservatory. Alexander Buzlov, a prize-winner of more than fifteen international competitions and regular participant of prestigious music festivals, is, in the opinion of the New York Times, “in the Russian tradition, a cellist with a huge capacity to make the instrument sing … pulling his audience into the sound”. A grandson of Vera Gornostayeva, the pianist Lukas Geniušas is a representative of the outstanding music dynasty and silver medallist of the Chopin and Tchaikovsky international competitions.