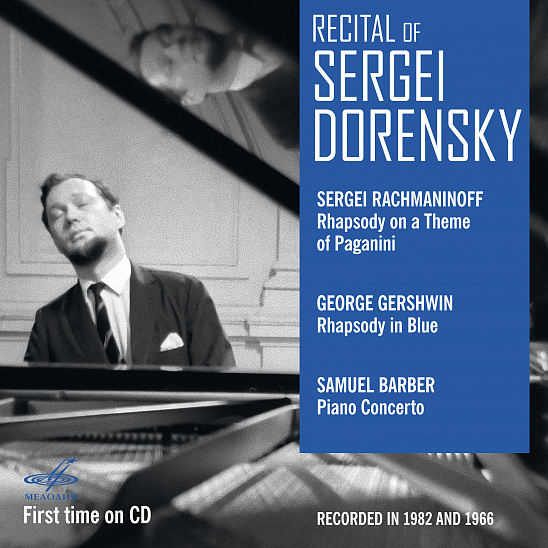 Firma Melodiya presents Sergei Dorensky’s disc of 20th century piano concertos written in America.
Sergei Dorensky (born 1931), a Professor and long-time Dean of the piano faculty of the Moscow Conservatory, chairman and judge of prestigious international competitions is a rare example of active artistic longevity. He is known today as a teacher whose students (Nikolai Lugansky, Denis Matsuev, Ekaterina Mechetina, Andrei Pisarev, Vadim Rudenko, Alexander Shtarkman, Victoria Korchinskaya-Kogan, Pavel Nersessian and many others) keep the flag of the Russian piano school flying high. However, Sergei Dorensky's heritage is an original page in the overall picture of the national performing arts.
Dorensky studied under the renowned virtuoso pianist and teacher Grigory Ginzburg. In 1955, he was awarded the first prize at the competition that took place during the World Festival of Youth and Students in Warsaw. The pianist’s participation in the international competition in Rio de Janeiro (1957, second prize) was a triumph. “Of all the pianists [...] no one else won so much sympathy of the public and caused such a unanimous delight”, wrote a Brazilian newspaper.
In 1982, Dorensky made a record with Sergei Rachmaninoff’s Rhapsody on a Theme of Paganini and George Gershwin’s Rhapsody in Blue. Both works written in America by the composers with Russian roots and performed by the remarkable musician have much more in common than it may seem at first glance.
It is no secret that the sonorous “culmination waves” in Gershwin’s Rhapsody reveal an obvious influence of the older Russian fellow composer. On the other hand, Rachmaninoff, as a sensitive artist, could not disregard the “melting pot” of American music where jazz reigned supreme. Consciously or not, Rachmaninoff accepts the very essence of jazz – a combination of a strict pattern with almost unlimited freedom of expression – as a basis of his composition.
Back in 1966, Sergei Dorensky included the piano concerto by the outstanding American composer Samuel Barber in his repertoire. He was the first domestic pianist to perform the work that was so successful in the USA and Europe. He interprets the concerto with an "unexpected Russian flavour [...] in a brilliant virtuosic manner." The hidden “Russian” roots and the influence of Rachmaninoff’s and Horowitz’s romantic pianism on the American composer’s work captured in Dorensky’s rendition make it even more peculiar.