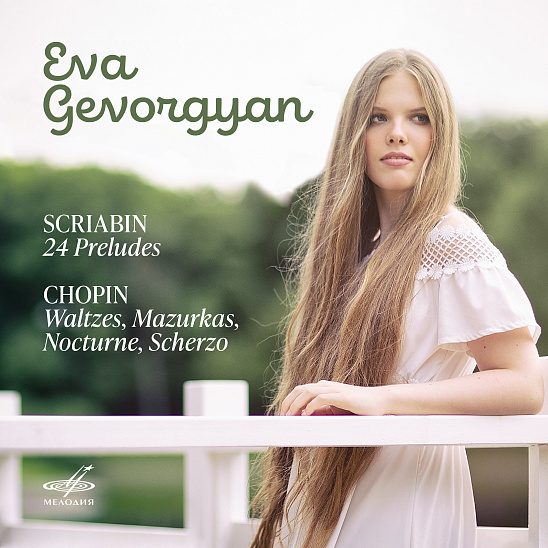 Firma Melodiya releases the debut album of the eighteen-year-old pianist who has received the International Classical Music Award and prizes of more than forty children and youth competitions. The scholarship holder of the Spivakov, Matsuev and Kissin foundations, Eva Gevorgyan chose Alexander Scriabin’s 24 Preludes and Frederic Chopin’s miniatures for her debut album that was recorded in 2021.

“Eva Gevorgyan is a mature musician beyond her age, not only superbly equipped with pianistic resources, but also clearly understanding how to use them,” says Moscow Conservatory Prof. Natalia Trul about her student. “She has exceptional internal responsibility and a “musical conscience” of the highest order...”

Eva received her first competition prize at the age of ten when she attended the graduate class of the Central Music School of the Moscow Conservatory. At the age of thirteen, she became the silver medalist of the 18th Nutcracker Television Competition in Moscow. A year later, she received the ICMA Discovery Award and made her debut at London’s Albert Hall.

Chopin’s music accompanied Eva Gevorgyan from her first steps on the big stage and brought her first awards and rave response from the audience. The album features Four Mazurkas, Op. 17, two Grandes valses brillantes from Op. 34, the Nocturne in C sharp minor (Op. 27, No. 1), and the large-scale Scherzo No. 4. A kind of mini-anthology of Chopin’s works is organically combined with the Scriabin cycle. The then young Russian composer wrote his preludes focusing on Chopin’s model, but already clearly demonstrated glimpses of his own individuality. Subtly and delicately, and at the same time, resolutely and courageously, the young artist plunges into the first circle of the Scriabin musical universe that stretches from “supreme refinement” to “supreme grandeur.”