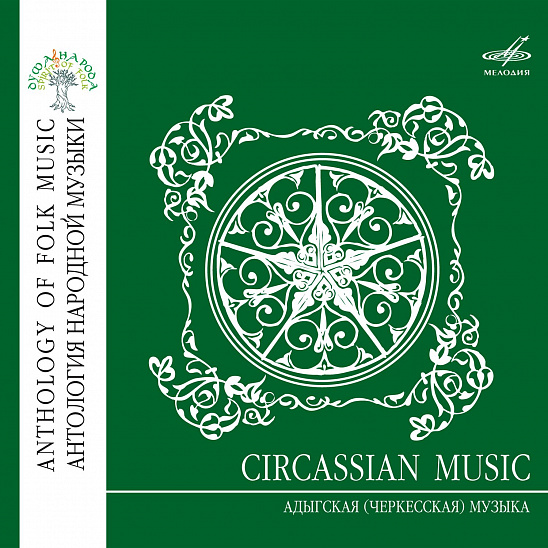 The Adygs (Circassians) is how the peoples who formed to the east of the Black Sea and the Kuban River called themselves. Towards the beginning of the 19th century the Adygs comprised 12 tribal unions which possessed a common culture including a common folklore heritage, one language, which pertained to the Adygeyan-Abkhazian group of Caucasian languages. The present-day Adygs in Russia (the Adygeyans, Kabardinians, Circassians and Shapsugs), who live in Kabardino-Balkaria, Karachay-Cherkessia, Adygea, the Stavropol and Krasnodar Regions comprise a population of over 750 thousand people. During the Caucasus War a large number of the population was deported to the Middle East, and presently the Adygs (5.5 million people) are scattered throughout the whole world.

The lengthy history of the Adygs, the characteristic features of their world perception, as well as the social norms of people’s behavior have found their reflection in Adygeyan folklore. The archaic rites and the songs broadly demonstrate the pagan pantheon of Gods – patrons of thunder (Shiblee), water (Psykh’ueguashee), fire and metal (Tl’epsh), forests and hunting (Pshymezytkh’ee) and others. Traces of Christian and Muslim influences could be discerned in some of the rites and songs (Elijah the Prophet becomes Elee, St. George becomes Daooshchdjerdjiy, Christmas carols could be traced in Kh’uromee). Chants from Islamic religious service – the Zakiry – have undergone transformation of genre and applied to vernacular music (including lullabies and songs from the Soviet period).

The Adygeyan folk song has always held a special social status: for a lengthy period of time it remained an important information channel which fixated the stages of the historical development of this ethnicity; the folk genres served as a measuring guide for social consciousness and dictated the ethical, moral and aesthetical ideals. As a result of this role for folk songs society ensured its complete trust for their songs and accepted the actuality and truthfulness of the content of the folk text. The people venerated their folk narrators, the geguako (djeguakIuee), whose artistic skills could be classified as oral professional art.

The genre makeup of the Adygs’ singing art includes some large strata: songs directly connected to labor (songs of field tillers, songs of corn harvest, songs of drivers of bulls during threshing, songs of sickle mowers, songs of fur processors, millers’ and blacksmiths’ songs and others), songs indirectly connected to labor (hunting songs, invocations of rain, sons for the New Year), and songs performed at any time and under any circumstances (epic songs (nart, pshinatli), historical songs about heroes and lyrical songs).

Since the end of the 15th century the musical folklore of the Adygs demonstrates a predomination of historical heroic songs, which contain a broad range of content and determine the means of performance; traits of musical and poetical feeling and purpose in everyday life: songs for groups or for solo singers, marching songs and songs in memory. Inter-genre groups of songs include songs of battles with foreign enemies, songs about inter-ethnic conflicts, prisoners’ songs, mahadjir songs (IstambylakIuee) and ballad songs.

In the Adygeyan folklore genre system widespread popularity was achieved by the term “gybza” (mourning song) which on functional and semantic levels presents the stylistic form of songs geared on conveying mourning motives in various genres of songs, from epic pshinatli to contemporary lyrical ones.

The Adygeyan song is marked by two styles of performance: the first, solo style is typical for genres which presume individual form of narration or purely female singing, the second style, featuring ensemble singing, with one voice on a part, presupposes ensemble vocal music with a male cast (yezh’u). The strata of textures of soloists singing together in an ensemble are set in a responsorial, antiphonal and stretto interrelationships with each other. A large number of historical-heroic and lyrical songs assert a mobile bourdon type of polyphony.

The folk instrumental music uses the overall name of a category of musical instruments, pshina, different varieties of which are determined by the additional term, which demonstrates the instrument’s typical construction (pshinadykuako – angular pshina), a characteristic means of sound creation (apapshina – finger (plucked) pshina and shikapshina – pshina with horsehair, i.e. bowed `string instrument).

The collection of folk instruments of the Adygs includes 3 groups – the woodwind group – kamyl (transverse flute), bzhami (signal horn), syrina (a type of flute), nakyra (shalmey with a forked tongue), bzhanifa (bagpipe); the string group – apapshina, shikapshina, shapsug lyre and zither; and percussion instruments – pkhatsich (a type of rattle), pkhatyrko (pieces of wood clapped together), shontryp (two-sided drum with and without a waist), and do’ol (two-sided drum). From the end of the 19th century in widespread use was the diatonic keyboard harmonica (pshina), which in the 1970s underwent the transformation into a chromatic instrument.